BATTAMBANG, Top things to do

​The real Cambodia, far from the jetset destinations of Phnom Penh and Siem Reap. Unfurling along the banks of the Sangker River, Battambang is one of the country’s best-preserved colonial-era towns. Shophouses host everything from fair-trade cafes to bike excursions. Beyond the town lie the Cambodian countryside and a cluster of ancient temples - while they’re not exactly Angkor Wat, they lack the crowds. Compared with the tourist hubs of Siem Reap and Phnom Penh, there are few visitors and the city - more like a small town - has retained its Cambodian charm. Here are the top things to do in Battambang.

TOP THINGS TO DO IN BATTAMBANG 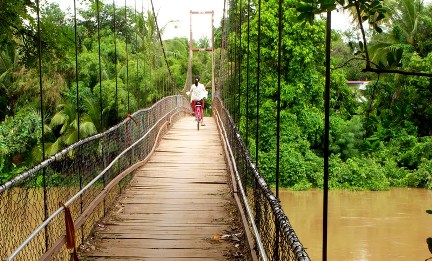 About 2km south of central Battambang, the village of Wat Kor is centred around the temple of the same name. It's a great place to wander, especially late in the afternoon when the opposite (east) bank of the Sangker River is bathed in amber tones by the sinking sun. Picturesque bridges span the river, the spires of Wat Kor glow bright platinum and Khmer village life is on full display.
About 1.5km beyond Wat Kor, you'll encounter a cluster of Khmer heritage houses that the village is known for. Built of now-rare hardwoods almost a century ago and surrounded by orchard gardens, they have wide verandahs and exude the ambience of another era.

Two of the approximately 20 heritage houses in the Wat Kor area are open to visitors: Mrs Bun Roeung's Ancient House and neighbouring Khor Sang House. The owner of each will give you a short tour in French or English. They have floors worn lustrous by a century of bare feet and are decorated with old furniture and family photos.
Mrs. Bun Roeung's Ancient House was built in 1920 by a local lawyer. The owners recently turned the rear section of the house into homestay accommodation – a unique option for architecture and history fans.
Khor Sang House was built in 1907 by the French-speaking owner’s grandfather, who served as a secretary to the province’s last Thai governor. The rear section dates from 1890.

Midway between Battambang and Prasat Banan, in an area known for its production of chilli peppers (harvested from October to January), Cambodia’s only winery grows Shiraz grapes to make reds. It tastes unlike most wine you’ve ever encountered, but is actually quite earthy and complex.
Officially recognised by Cambodia’s Ministry of Industry, Mines & Energy, Banon wines belong to that exclusive club of wineries whose vintages improve significantly with the addition of ice cubes. Also made here is Banon brandy, which has a heavenly bouquet and a taste that has been compared to turpentine. Sampling takes place in an attractive garden pavilion.

The winery is 10km south of Battambang and 8km north of Prasat Banan. 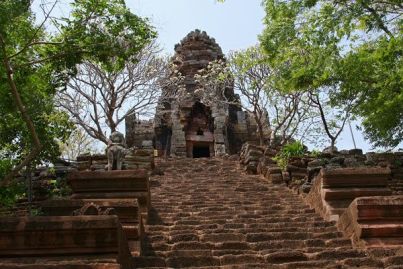 It's a 358-stone-step climb up Phnom Banan to reach Prasat Banan, but the incredible views across surrounding countryside from the top are worth it. Udayadityavarman II, son of Suryavarman I, built Prasat Banan in the 11th century; some locals claim the five-tower layout here was the inspiration for Angkor Wat, although this seems optimistic. There are impressive carved lintels above the doorways to each of the towers and bas-reliefs on the upper parts of the central tower.
From the temple, a narrow stone staircase leads south down the hill to three caves, which can be visited with a local guide.
Prasat Banan is 23km south of Battambang. 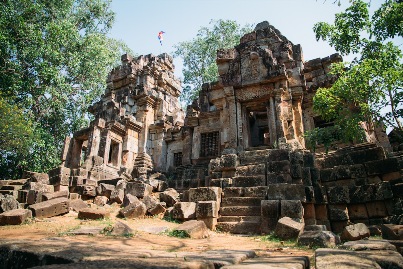 Hidden behind a colourful modern pagoda and a gargantuan Buddha statue is this atmospheric, partly collapsed 11th-century temple. Wat Ek Phnom measures 52m by 49m and is surrounded by the remains of a laterite wall and an ancient baray (reservoir). A lintel showing the Churning of the Ocean of Milk can be seen above the eastern entrance to the central temple, whose upper flanks hold some fine bas-reliefs. It's about 10km north of central Battambang.
This is a popular picnic destination for Khmers, especially at festival times, and a pilgrimage destination for women hoping to conceive. 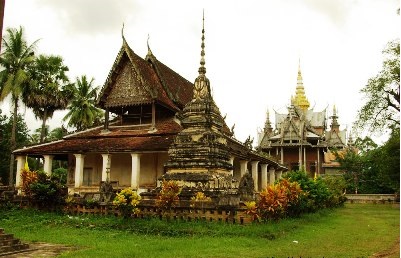 About 4km north of Battambang, Wat Somrong Knong was built in the 19th century on the site of a pre-Angkorian temple complex. The Khmer Rouge used the temple grounds as a prison and it's believed that around 10,000 people were executed here. The complex today houses the gorgeous main pagoda and a mishmash of ancient ruins, glittery modern structures and memorials to those who perished here.

To get here, cross the bridge over the Sangker River 1.7km north of the ferry pier, then continue north on the other side for another 1.7km and take a right on a small dirt road. Continue 500m down this road to the site. If coming from the north, it's about 2.5km south of the bridge near the prahoc factory, though that bridge was out of commission during research. 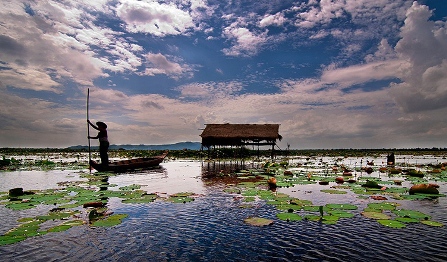 Also known as the Killing Dam, Kamping Puoy was one of the many grandiose Khmer Rouge projects intended to recreate the sophisticated irrigation networks that helped Cambodia wax mighty under the kings of Angkor. As many as 10,000 Cambodians are thought to have perished during its construction, worked to death under the shadow of executions, malnutrition and disease.

There's little to see but people come to picnic, and to take row boats (10,000r for two hours) out on the water.
These days, thanks to the dam, the Kamping Puoy area is one of the few parts of Cambodia to produce two rice crops a year.
Kamping Puoy is 27km west of Battambang (go via NH5 and follow the irrigation canal). It’s easy to combine a visit here with a stop at Phnom Sampeau.

7. Take a trip on the bamboo train 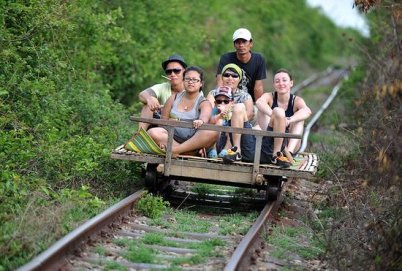 A huge sigh of relief rippled across Cambodia when in January, the government announced that the bamboo train was back on track and being reinstated in a different area after operations were halted in its original location. Called a norry in Khmer, the “train” consists of a small bamboo platform covered with a mat and a few thin cushions to sit on. This sits on two sets of bogies with a motor at the back. A wooden pole is used as both the brakes and accelerator, with the train hitting speeds of up to 50km/h. A truly hair-raising ride. 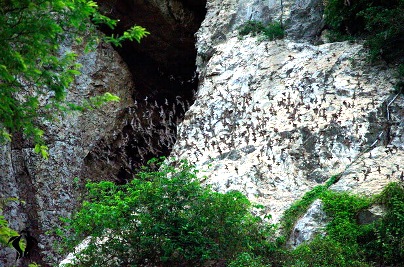 Take a tuk tuk in mid-afternoon to Phnom Sampeou, about 12km from Battambang centre, and head to the peak. Here, you’ll find Wat Sampeou and its stunning views that stretch uninterrupted into the horizon. Visitors can explore the temple as well as the neighbouring Killing Caves, where Khmer Rouge soldiers pushed their victims to their deaths. A shrine sits inside the caves. Just before dusk, head back down to the base, and join the crowds that gather at about 6pm to watch the seemingly endless stream of bats pour out of the caves for a night of hunting. 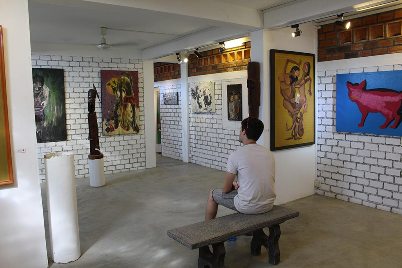 Expanded from a workshop into a bona fide gallery in 2015, this impressive space has a permanent collection upstairs displaying the edgy, contemporary works of its four founders, who in their youth were expelled from Thailand and forced to work as child labourers, before being rescued by an NGO and encouraged to express themselves through art. The results are awe-inspiring.