SIEM REAP, Best things to see and do

Siem Reap is renowned as the gateway to the temples of Angkor. The famous temples of the ancient Khmer kingdom sit on the city’s outskirts, and welcome thousands of tourists every day. The best time to see Angkor Wat, the most famous temple, is either at sunset or sunrise. Not only is the temperature significantly cooler than the scorching midday heat, the view of the temples – which many jostle to see across a beautiful lake – is simply breath-taking. Here, the top things to see and do in Siem Reap.

BEST THINGS TO SEE AND DO IN SIEM REAP 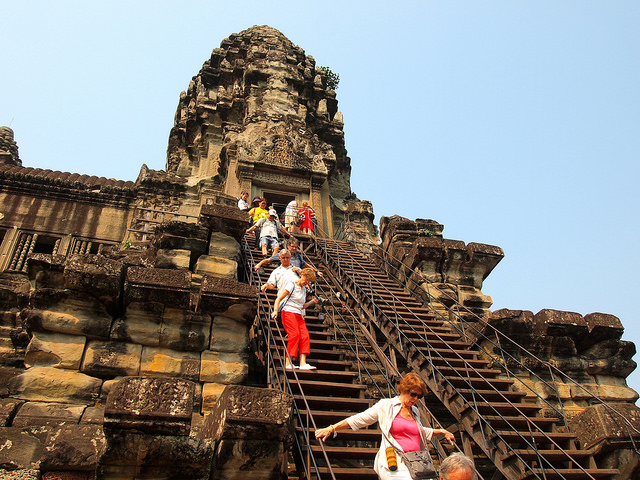 Angkor Wat is the largest religious monument ever built, and it is one of the most spectacular temples in the world. It is surrounded by massive waterways and has survived both invasions and wars. The evidence of this turmoil can be found in the wear and tear in its structure.
In addition to its enormous size, Angkor Wat’s structure is also covered in intricate stone detailing throughout its entirety. Visitors are advised to wear modest clothing, be respectful to the monks that visit frequently and to not sit on the structures. 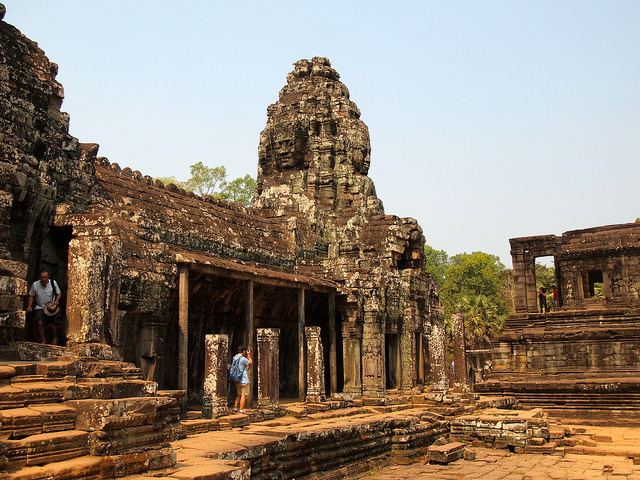 Angkor Thom is actually a city, and it was the last capital of the Khmer empire. It is most famous for the impressive Bayon Temple found there, which was constructed to honor Cambodia’s king, Jayavarman VII. It is located just north of Angkor Wat.

There are 216 enormous faces of Avalokiteshvara carved right into the structure found throughout the temple, and its construction dates back to the 12th century. 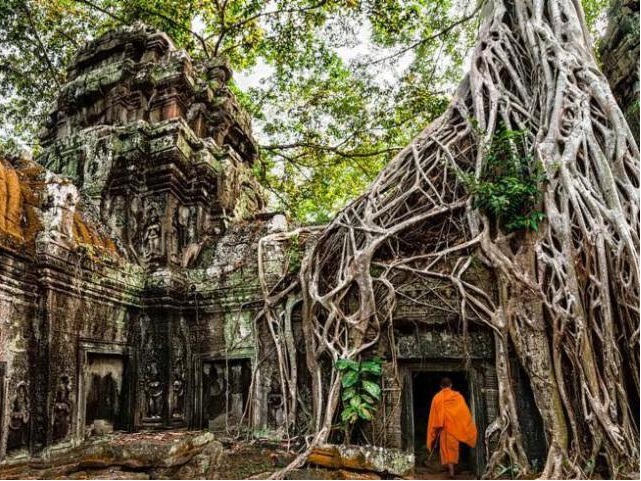 Visitors may recognize the temple of Ta Prohm as soon as they ascend its grand entrance. Straight out of scenes from the movie Tomb Raider, Ta Prohm is a magical temple engulfed by overgrown, surrounding trees. The most popular area of the temple overtaken by nature is the entrance pavilion, where Angeline Jolie’s character Lara Craft roamed the grounds in the popular film, following the sounds of a child’s laughter before picking the flower that sends her falling through the ground. The grounds of this temple were also used for the filming of Two Brothers.
The temple was built some 1,000 years ago, and it is almost completely immersed in nature, as the forest continues to grow straight into the Ta Prohm. This has been incredibly damaging to its original infrastructure, and it is currently being restored by the Archaeological Survey of India. 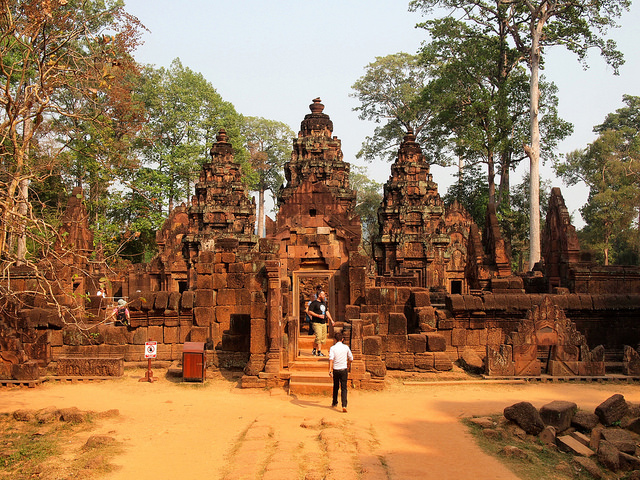 To escape the madding crowds, Banteay Srei is worth the journey. The site is located 35 kilometres (22 miles) from Siem Reap, with the drive taking visitors through a stunning countryside, past children screaming ‘hello’ from their bikes, farmers working the fields and women doing laundry in streams.
Boasting intricately carved buildings made from soft, pink sandstone, this miniature temple could be plucked straight from a fairytale.

One of the more quirky places in town is the garden of local master sculptor Dy Proeung, which houses miniature replicas of Angkor Wat, the Bayon, Banteay Srei and other temples. It is the bluffer’s way to get an aerial shot of Angkor without chartering a helicopter, although the astute might question the presence of oversized insects in the shot.
There is also a display of scale miniatures at Preah Ko temple. 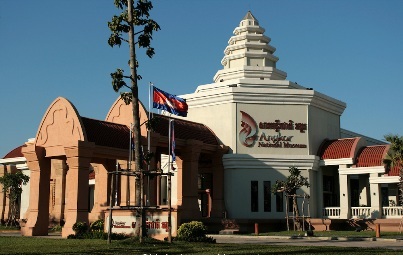 Looming large on the road to Angkor is the Angkor National Museum, a state-of-the-art showpiece on the Khmer civilisation and the majesty of Angkor. Displays are themed by era, religion and royalty as visitors move through the impressive galleries. After a short presentation, visitors enter the Zen-like Gallery of a Thousand Buddhas, which has a fine collection of images. Other exhibits include the pre-Angkorian periods of Funan and Chenla; the great Khmer kings; Angkor Wat; Angkor Thom; and the inscriptions.

Exhibits include touch-screen videos, epic commentary and the chance to experience a panoramic sunrise at Angkor Wat, though there seems to be less sculpture on display here than in the National Museum in Phnom Penh.
Some of the standout pieces in the collection include a late 12th-/early 13th-century seated Buddha sheltered by a naga, a 7th-century standing Vishnu from Sambor Prei Kuk in Kompong Thom, and a stunning 10th-century lintel from the beautiful temple of Banteay Srei.

It is a very useful experience for first-time visitors, putting the story of Angkor and the Khmer empire in context before exploring the temples. As the museum is entirely air-conditioned, plan a visit during the middle of the day to avoid the sweltering midday temperatures at the temples of Angkor.
The museum is open April through September from 8:30 a.m. to 6 p.m. and October through March from 8:30 a.m. to 6:30 p.m. 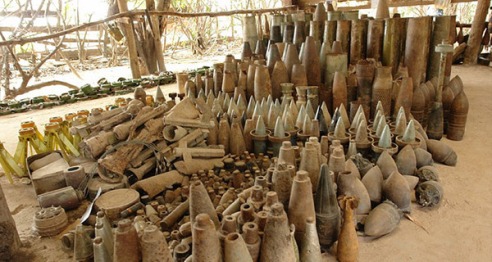 The Cambodia Landmine Museum educates visitors about the importance of clearing undetonated landmines, which have killed or maimed some 63,000 people in Cambodia. It is estimated that some 5 million bombs remain in the country, and these continue to affect the people living here. The museum has guided tours available to guests in both English and Japanese.
The museum is open every day from 7:30 a.m. to 5:30 p.m. 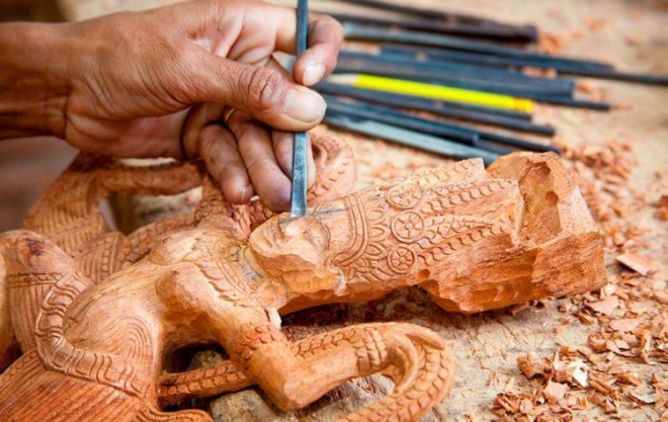 Siem Reap is the epicentre of the drive to revitalise Cambodian traditional culture, which was dealt a harsh blow by the Khmer Rouge and the years of instability that followed its rule. Les Chantiers Écoles teaches wood- and stone-carving techniques, traditional silk painting, lacquerware and other artisan skills to impoverished young Cambodians. Free guided tours explaining traditional techniques are available daily from 7.30am to 6.30pm. Tucked down a side road, the school is well signposted from Sivatha St.
On the premises the school runs a beautiful shop called Artisans Angkor, which sells everything from stone and wood reproductions of Angkorian-era statues to household furnishings. There’s also a second shop opposite Angkor Wat in the Angkor Cafe building, and outlets at Phnom Penh and Siem Reap international airports. All the profits go back into funding the school and bringing more young Cambodians into the training program, which is 20% owned by the artisans themselves.

Les Chantiers Écoles also maintains a silk farm, which produces some of the best work in the country, including clothing, interior-design products and accessories. 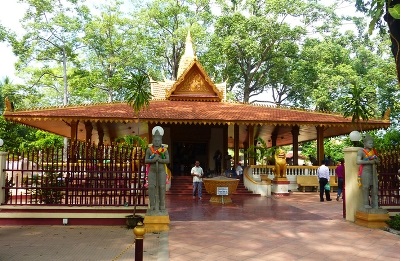 Located just west of the royal residence is the shrine of Preah Ang Chek Preah Ang Chorm. Said to represent two Angkorian princesses, these sacred statues were originally housed at the Preah Poan gallery in Angkor Wat, but were moved all over Siem Reap for their protection from invaders, eventually settling here in 1990. Locals throng here to pray for luck, especially newlyweds, and it is an atmospheric place to visit around dusk, as the incense smoke swirls around.
Next to the shrine are the tall trees of the Royal Gardens, home to a resident colony of fruit bats (also known as flying foxes) that take off to feed on insects around dusk. 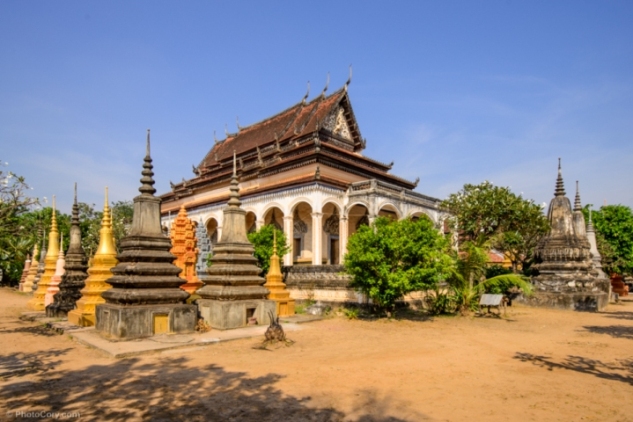 This is one of the town’s oldest temples and has a collection of well-preserved wall paintings from the late 19th century depicting the Reamker, Cambodia’s interpretation of the Ramayana.

The monks here regularly chant sometime between 4.30pm and 6pm and this can be a spellbinding and spiritual moment if you happen to be visiting. 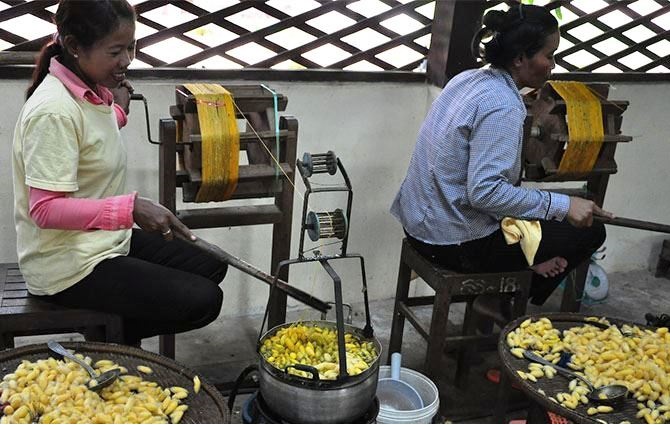 Les Chantiers Écoles maintains the Angkor Silk Farm, which produces some of the best work in the country, including clothing, interior-design products and accessories. All stages of the production process can be seen here, from the cultivation of mulberry trees to the nurturing of silkworms to the dyeing and weaving of silk. Free tours are available daily. A free shuttle bus departs from Les Chantiers Écoles in Siem Reap at 9.30am and 1.30pm.
The farm is about 16km west of Siem Reap, just off the road to Sisophon in the village of Puok. 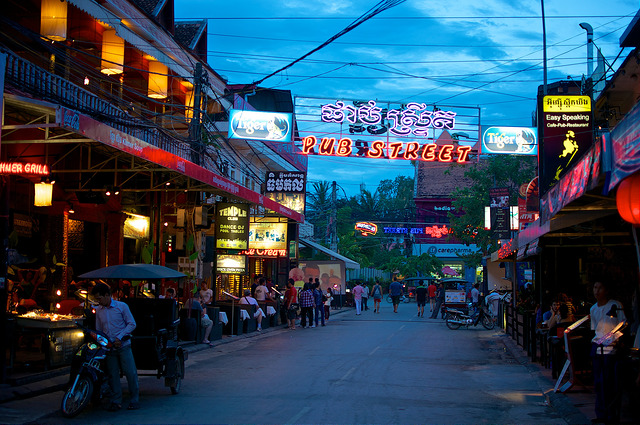 Head down to Pub Street in downtown Siem Reap for a wild night out at any one of the number of bars there. From clubs to pubs to bars, there are many nightlife venues to choose from.

The Angkor What's bar is a popular destination for party-goers and backpackers alike. Heavy drinkers are rewarded with a free T-shirt for every two liquor-ridden buckets they finish. 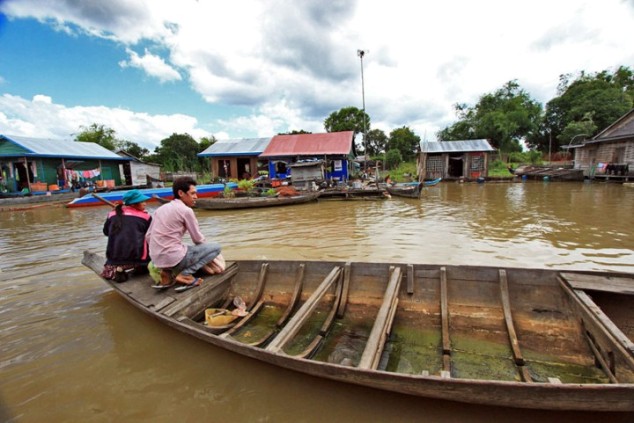 More than three million people call the banks of Tonlé Sap home. Many Cambodians make their living here by fishing on the water. The lake is one of the largest bodies of freshwater in all of Asia.

Visitors can get a glimpse of a variety of wild birds as well as turtles and maybe even a crocodile or two at this lake.